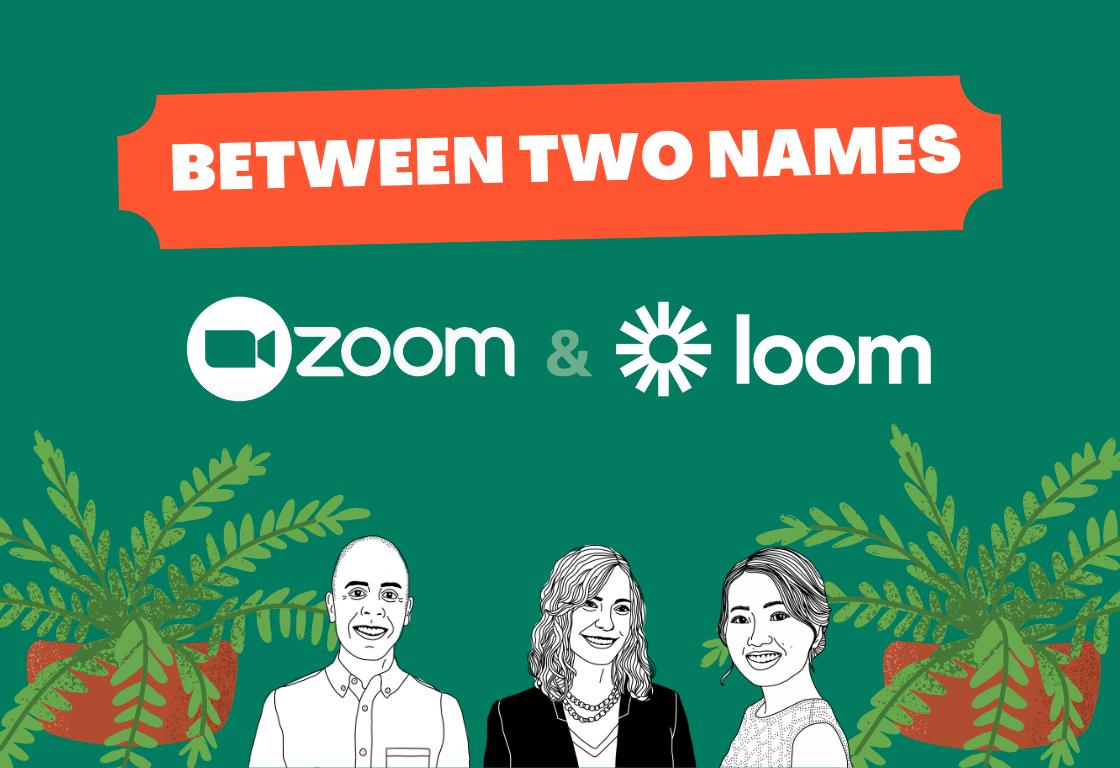 Between Two Names is a new series on The Word by Tanj. The column takes a lighthearted look at two brand names we’ve spotted in the wild. We’ll contemplate, compare and contrast how names work, and what it means for you the next time you name a brand.

We all know Zoom — the video conferencing platform.

Not everyone knows Loom  — an asynchronous video messaging app.

It easily records videos of you and your screen to share information without having to hold live meetings.

For more on why Loom could be as big as Zoom, watch this video.

At Tanj, we use Zoom and Loom daily. We’re constantly interacting with the two names, both of which are so strikingly similar.

Given that they both co-exist in the video/meeting space, you might think that causes confusion.

As similar as they are, they’re entirely different names.

Let’s get between them.

Zoom is all about zooming or dashing to and from conversations effortlessly. Although the meaning of zooming in or zooming out like a camera is embedded in there as well, the name feels clear, direct, and singular in meaning.

Loom on the other hand has an array of definitions. A frame or machine to make textiles. The act of weaving on a loom. An impending thing or event. A not so clear appearance. It’s both a noun and a verb. We see the meaning as tied to interlacing or weaving, but you might view it differently.

Regardless, Zoom is super straightforward, while Loom is multidimensional.

Yes, Zoom and Loom are both real words, and only four letters. But the overall feel of each is distinct. The Z gives Zoom more power, more buzz. The L in Loom naturally feels softer, calmer. Zoom is a bit more descriptive than Loom, which as we noted above, suggests an idea without being too overt.

How We Use Them

We all Zoom. Do we all Loom?

A verbable name is often considered the Holy Grail of naming.

When we think of “verbable” names like Uber, Slack, Skype, we see they typically fit three criteria:

Both Zoom and Loom are also verbs, so they have an instant advantage.

Zoom meets all three criteria, and technically Loom does too (they have 14mm users and are valued at $1b+!, which we would consider lots and lots of success!).

But Loom’s usage as a verb in regular conversation seems limited, at least for now, since it’s not nearly as well known as Zoom.

Our very own Jill Stanewick was recently quoted in this article about the usage of double Os in many highly successful, prominent brand names. Think Yahoo, Google, Goop, Noom.

Zoom and Loom have joined the club.

Why do double Os work? According to Jill:

You know, now that we're thinking about it, we just might try to start the trend of making Loom a verb. If you hear us talking about Looming a presentation, be cool. It just might be as common as Zooming this time next year.

Scott Milano is the founder & managing director at Tanj.