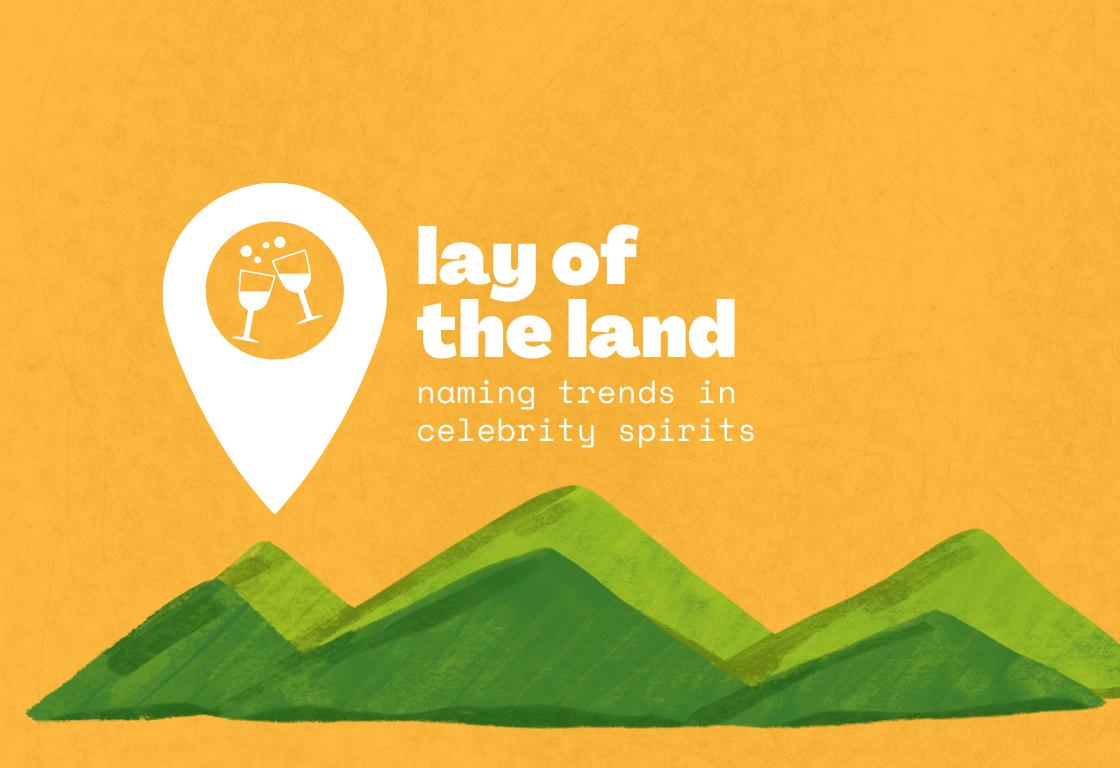 When you’re a celebrity, one of your most important assets is your name. It’s natural, (and evidently, profitable) to want to leverage it in other entrepreneurial endeavors aside from the business of show. One particular industry that has seen an explosion of star power recently is the world of alcohol. Gin, vodka, whiskey, tequila, wine—it seems every kind of liquor and spirit can turn into liquid gold with a kiss of Hollywood fame. Pour yourself a glass or two as we take you through the ins and outs of naming celebrity-backed booze brands. This round’s on us.

This is how we do it

Whether it’s whiskey or wine, the process of producing liquor is endlessly fascinating. When there’s a interesting story to be told about a particular method or technique, integrating this into the name itself can signal what sets it apart from all the other bottles on the shelf.

Tequila is typically aged in whiskey or bourbon barrels, but Adam Levine and Behati Prinsloo’s Calirosa tequila is aged in barrels of California red wine, giving it a rosy pink hue—and its name. (Unfortunately, Adam recently had to look farther afield for inspiration for his own baby’s moniker.)

For Metallica’s Blackened whiskey, the process is sound. Literally. It gets its name from what they call black noise sonic enhancement: Metallica’s music plays on loop in the cellar where the whiskey barrels are aging. The music makes the whiskey move within the barrels, creating subtle nuances for each batch. You can, in fact, find the whiskey playlists on their website.

A sense of place

A good drink has the potential to transport you to another place. For Kate Hudson, memories of throwing parties and enjoying many a cocktail hour with friends led her to name a line of vodka after the street where she lived in New York: King St. Vodka.

Peyton Manning and Andy Roddick’s Sweetens Cove Bourbon is named after a Tennessee golf course, where it’s a long-standing tradition for golfers to take a shot of whiskey before they tee up for the first time.

It’s not always another destination—it could also be another era. The name of Ryan Reynolds’ Aviation Gin comes from a classic pre-Prohibition cocktail called The Aviation: a mix of gin, Crème de Violette, Maraschino liqueur, and lemon juice.

For many celebrities, getting into the spirits business is a passion project. It makes sense to reference something personal. Post Malone’s Maison No.9 rosé is named after his favorite tarot card, the nine of swords. Dwayne “The Rock” Johnson’s Teremana tequila, meaning “spirit of the earth,” is in part an homage to his Samoan heritage—tere from the Latin word terra and mana from the Polynesian word for spirit. Kendall Jenner’s 818 Tequila refers to the area code for Calabasas, California, where she was raised. Inspired by her Black-Venezuelan father and her Irish mother, Mariah Carey gave her Irish cream liqueur a fitting name: Black Irish.

For Ian Somerhalder and Paul Wesley, who played the Salvatore brothers on The Vampire Diaries, it felt natural to allude to their partnership (onscreen and off) in Brother’s Bond Bourbon. Similarly, for Bryan Cranston and Aaron Paul, their Dos Hombres Mezcal is a nod to their time working together on Breaking Bad—dos hombres meaning “two men,” they see themselves as two guys on a quest, whether it’s producing meth on television or making award-winning mezcal in real life.

Make it up, but make it stand for something. The “Longbranch” in Matthew McConaughey’s Wild Turkey Longbranch Bourbon comes from the idea of extending an olive branch, or an offer of reconciliation. George Clooney’s Casamigos Blanco Tequila refers to a house of friends—fitting for a product that takes center stage at celebrations. For Bruno Mars and his SelvaRey Rum, the Spanish name translates loosely to “king of the jungle.” It’s a nod to Don Pancho Fernandez, the godfather of rum, who built a distillery in the Panamanian wilderness.

Give it to them straight

When all is said and done, there’s a case to be made for keeping it simple and straightforward. Why overthink it? Sammy Hagar straight-up named his line of rum Sammy’s Beach Bar Rum. Elon Musk went with Tesla Tequila. (He wanted to name it Teslaquila, but was shot down by Mexico’s Tequila Regulatory Council.) Bob Dylan didn’t use his own name, and instead referenced the title of one of his tunes with Heaven’s Door Straight Rye Whiskey.

A good name is like a good drink: it gets people talking. Having the support of someone well-known often means the battle is half-won. With star power behind it or otherwise, the possibilities for naming are truly endless in a wide-ranging category of products that are meant to be relished and savored in good company.

Tell your story. Have fun with it. Give them something to talk about. Above all else, go with a name that stays with you long after you’ve enjoyed the last drop. As glorious as the momentary buzz is, the best names are the ones that’ll age like fine wine.

Liz Yap is a strategist for naming and brand language at Tanj.